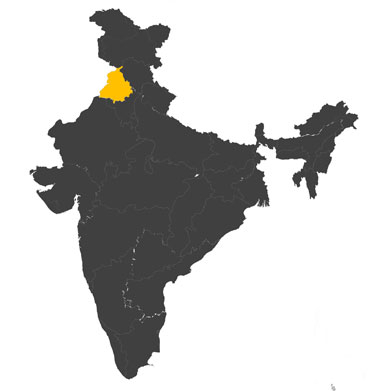 All of Punjab, Haryana, Himachal and Jammu and Kashmir are easily accessible from Chandigarh. With the hills close by, cool environs are very easily reached by road. Chandigarh also acts as a gateway to many pilgrimage centres in the neighbouring states of Punjab, Haryana and Himachal Pradesh.

Situated at a distance of 20 km from Chandigarh and 55 km from Patiala is...
read more »

The Great Tirth (Centre of pilgrimage) of the Sikhs, it is about 50 kms. to the north...
read more »

Located in the midst of the natural beauty of Shivalik ranges Bhakra Nangal dam is also...
read more »

Sanghol is a village located in Fatehgarh Sahib District (F.G.S.) of Punjab, India. It is also...
read more »

Anandpur Sahib is a city in Rupnagar district in the state of Punjab, India. Known as...
read more »

Patiala is located around a castle named Qila Mubarak (the Fortunate Castle). It was...
read more »

Not far from Rauza Sharif, Aam Khas Bagh, which as its name denotes was a highway-inn...
read more »

Situated at a distance of 20 km from Chandigarh and 55 km from Patiala is the Zoological Park, Chhatbir. The park area is spread over 202 Acres of raw scrubland over River Ghaggar.
It houses 52 species of animal and 62 species of birds in a simulated natural habitat. It is famous for its Lion Safari and is the biggest park of its type in India. Tiger Safari near Ludhiana and a Deer Park at Neelon on Ludhiana – Chandigarh road are also worth visiting

240 kms from Chandigarh in Amritsar (literally, “Pool of Nectar”), was founded by Guru Ramdas, the fourth guru of the Sikhs, in the year 1579.

The Golden Temple Amritsar India (Sri Harimandir Sahib Amritsar) is not only a central religious place of the Sikhs, but also a symbol of human brotherhood and equality. Everybody, irrespective of cast, creed or race can seek spiritual solace and religious fulfilment without any hindrance. It also represents the distinct identity, glory and heritage of the Sikhs. To pen-down the philosophy, ideology, the inner and outer beauty, as well as the historical legacy of Sri Harimandir Sahib is a momentous task. It is a matter of experience rather than a of description.

The Golden Temple Amritsar India (Sri Harmandir Sahib Amritsar) has a unique Sikh architecture. Built at a level lower than the surrounding land level, The Gurudwara teaches the lesson of egalitarianism and humility. The four entrances of this holy shrine from all four directions, signify that people belonging to every walk of life are equally welcome..

40 kms from Chandigarh
The Great Tirth (Centre of pilgrimage) of the Sikhs, it is about 50 kms. to the north of Patiala on Patiala Rupnagar Road via Morinda.
The main Gurdwara commemorates the martyrdom of the two tender Sahibzada(sons), Zorawar Singh(9 years) and Fateh Singh (7 years) of the tenth Sikh Guru, Sri Guru Gobind Singh Ji, who refused to apostasise from truth and religion under threat from their captor, the Suba of Sirhind and were suffocated to death in the walls which were raised around them. Alongside is the Burj of Mata Gujri-the grand-mother of these martyrs who could not survive the shock of their martyrdom. Nearby is the Gurudwara Jyto Swarup where the cremation ceremonies of the three were performed under duress. A great fair (Jor Mela) is held here for 2 days in the month of December.

Located in the midst of the natural beauty of Shivalik ranges Bhakra Nangal dam is also known for its scenic beauty and environment and the place offers an excellent spot for a day’s picnic.
Bhakra Dam is a concrete gravity dam across the Sutlej River, near the border between the states of Punjab and Himachal Pradesh. Being Asia’s second highest (225.55 m) dam, it attracts a large number of domestic and foreign tourists every day. It is considered to be world’s highest straight gravity concrete dam. The 90 km long dam is spread over an area of 168 sq km and is a combination of Bhakra dam and Nangal dam. Bhakra dam is 13 km upstream from Nangal city and Nangal dam, on the other hand, is 13 km down-stream. It controls the turbulent waters of Sutlej River for irrigation and power generation.
The main dam at Bhakra in the mountains has a 40 square kilometer reservoir, Gobind Sagar which has boating facilities and a restaurant.

40 kms from Chandigarh
Sanghol is a village located in Fatehgarh Sahib District (F.G.S.) of Punjab, India. It is also known as Uchha Pind Sanghol. It is about 40 km from Chandigarh on the way to Ludhiana and approximately 10 km from Dholewal. This place holds a special position on the archaeological atlas of India. Excavations at the site have yielded coins and seals related to Toramana and Mihirakula belonging to central Asia. A Buddhist stupa was excavated in 1968, but in February 1985 a rich treasure of 117 beautiful carved stone slabs,which includes 69 pillars, 35 crossbars, figures and figurines, was excavated by the experts of the Directorate of Archaeology, Punjab. Scholars have explained them as Kushan sculptures of the Mathura school of the 1st and 2nd centuries AD. These treasures have since been displayed for art lovers and historians in Sanghol Museum. Many of the art pieces from this museum often go on display as special exhibits at various museums around the world.
Situated on the top of a mound, Ucha Pind Sanghol is spread over an area of 200 km. Museum

It is famed for the Sanghol Museum. A large of number of relics dating from the late Harappan civilization (1720 – 1300 BC) to 6th century AD is found here.[1] More than 15000 artefacts were collected from this site and majority of them are displayed in this museum.
Sanghol also known as Uchha Pind is a famous village in the area. There are some mythical stories about the destruction of this village. The main village sits very high clearly visible from the surrounding towns. It is also linked to the Kissa “Roop Basant” stories as well. Some people from surrounding villages say that its ancient name was Sangla-deep.
There is a Buddhist Stupa and Monastery Complex aging 1st and 2nd century AD situated on the main road.

40 kms from Chandigarh
This beautiful and spacious mausoleum is a national historic monument which is venerated as a second Mecca by Suni Muslims, is visited annually in or about August by thousands of Naqshbandi Muslims from Pakistan, Afghanistan, Indonesia and India. In the premises of the mausoleum there are tombs and cenotaphs apart from a mosque. One such grand cenotaph is of King Shah Zaman of Afganistan.

80 kms away on the Chandigarh-Manali Road
Anandpur Sahib is a city in Rupnagar district in the state of Punjab, India. Known as “the holy City of Bliss,” it is a holy city of the Sikhs and is one of their most important sacred places, closely linked with their religious traditions and history. It is located on the lower spurs of the Himalayas surrounded by picturesque natural scenery, with the river Sutlej forming a shimmering and shiny blue border on the south west barely four miles away. Here the tenth guru, Guru Gobind Singh, baptised his followers in the Khalsa: the caste-less brotherhood of saint-soldiers.

The capital of the famous princely state just 70 kms from Chandigarh.

Patiala is located around a castle named Qila Mubarak (the Fortunate Castle). It was constructed by a militiaman, Baba Ala Singh in 1763
Qila Mubarak Complex -The Qila Mubarak complex stands in 10-acre ground in the heart of the city, and contains the main palace or Qila Androon (literally,’inner fort’), the guesthouse or Ran Baas and the Darbar Hall. Outside the Qila are the Darshani Gate, a Shiva temple, and bazaar shops which border the streets that run around the Qila and sell precious ornaments, colorful hand-woven fabrics, ‘jootis’ and bright ‘Parandis’.
It was the principal residence of the Patiala Royals until the construction of Old Moti Bagh Palace.
The entrance is through an imposing gate. The architectural style of this palace is a synthesis of late Mughal and Rajasthani. The complex has 10 courtyards along the north – south axis and each courtyard is unique in size and character, some being broad, others very small and still others mere slits in the fabric of building.
Sheesh Mahal
A part of the Old Moti Bagh Palace built in the 19th century by the Maharajas is the famous Sheesh Mahal literally meaning the Palace of Mirrors. The mahal contains a large number of frescoes, most of which were made under His Highness Maharaja Narinder Singh. A lake in front of the palace adds to the beauty. Lakshman Jhula, a bridge built across the lake is a famous attraction among the tourists. A museum housing the largest collection of Medals from the world collected by His Highness Maharaja Bhupinder Singh is also place here.
Baradari Gardens
The Baradari Gardens is located in the north of old Patiala city, just outside Sheranwala Gate. The garden complex, set up during the reign of Maharaja Rajindera Singh has extensive vegetation of rare trees and shrubs and flower dotted with impressive Colonial buildings and a marble statue of Maharaja Rajindera Singh . It was built as a royal residence with a cricket stadium, a skating rink and a small palace set in its heart named, Rajindera Kothi which after extensive restoration opened as a heritage hotel run by Neemrana Hotels group in 2009, it is also Punjab’s first heritage hotel.
The National Institute of Sports is located at Patiala.

Not far from Rauza Sharif, Aam Khas Bagh, which as its name denotes was a highway-inn for the use of royalty as well as common people. It was initially built by Babar and extended and almost rebuilt by Emperor Shahjehan. The royal part of the building has a mammoth water storage tank, a palace with beautiful murals on its walls, complete with hot-and-cold air conditioning facilities and a unique hydraulic system to work fountains.